The National Institute on Alcohol Abuse and Alcoholism identifies 86.3% of people 18+ reported that they have drank in their lifetime and about 26.45% at ages 18+ were engaged in binge drinking within the past 30 days. According to the 2018 National Survey on Drug Use and Health over 400,000 young people ages 12-17 had Alcohol Use Disorder (AUD) in the United states. About 5.0% were reported to receive treatment. The institute shows research that alcohol use during the teenage years could interfere with normal adolescent brain development and increase the risk of developing AUD.

In June 2020 alone, the Texas Alcoholic Beverage Commission reported that Texans created over 10 million dollars in alcohol revenue. Our RNA reported from the Texas Department of Transportation, El Paso County had 963 crashes related to driving under the influence. As a preventative measure, a social host ordinance was put into place in El Paso county that holds the individual owner as responsible for allowing a gathering involving underage drinking. El Paso, Texas was the first city in the state to pass a Social Host Ordinance in December 2017.

Alcohol and the Body

Driving Under the Influence 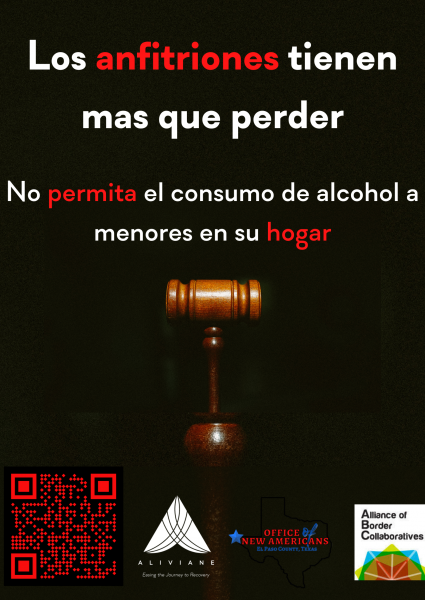